Treasures in Divinity Original Sin Enhanced Edition are hidden all across the map, carefully placed under dirt mounds or in secret rooms accessed only through keys found through various persons.

You can get the maps to these secrets from Geremo, in the Cyseal's market, or from Teller of Secrets in one of the portals in The End of Times, after completing the Healing the Mount quest (Luculla Forest).

Most of the secrets contain buried chests, but you may sometimes encounter something else, like for example skill books. After buying and reading a

map, info about the secret appears in the "Secrets" tab and the localization is marked on player's map (an icon of a small chest). When you mouse over the icon, a short description of the secret will appear.

Usually, you will have to dig in a pile of dirt to get to the

chest (the content of a chest is always random, but the items are of similar value). You can save right before opening a chest, and reload that save if you are unsatisfied with what you got. Just repeat the process till you find something that works for you.

You will need a

Shovel. You will find one in the Cyseal's graveyard. If you happen to lose it, you can buy one from a merchant, but it's a rather rare item. After arriving at the location of the treasure, look for a small pile of dirt and start digging by clicking on it (the shovel has to be in the equipment of the person digging, not in the companion's).

To locate a treasure, you don't have to buy a map. However, to notice it, you will need a lot of Perception (preferably more than 7). Thus, if you intend to look for treasures, develop the skills needed in one of your party members and equip him with items that increase perception value. You can also use potions that enhance perception, if you still do not see the treasure. 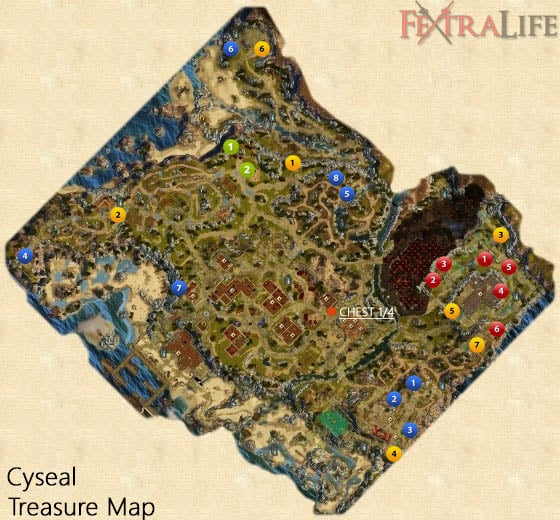 (4) Buried chest
In the corner, on the stairs near the villa buried chest is located.

(5) Buried chest
To get outside to the chest you need to have a high perception level, to notice in left wing of chapel the hatch, which is leading outside.

(7) Skillbook
You'll find the book on the desk inside hut. Key to the hut is in the chapel.

Chapel Riddle
(1) - (6) Riddle
In this place you'll find a key. Using it you'll be able to open chests with other keys in order seen on map, until you'll reach last chest.
The treasure is hidden in the very last chest.

Chest 1/4 – First chest of four to find, where all four allows to open "Last Chest" chest in The End of Time.

(1) Chest
Chest of baron Diederick. It lays on the left side of the throne and you'll open it using a key which you'll find nearby.

(2) Chest
West chest - the key is located in opposite side in the flames.

(3) Chest
East chest - the key is located near the west chest.

(4) Ruby
In the cellar of the lighthouse you'll find a ruby on a shelf.

(5) Diamond
Under the tree lays a skeleton, which has a diamond with him.

(6) Chest
To open it need a key, which you'll find near the statue of wind.

(7) Ruby
The stone is behind the painting on the floor. You'll get into building through the tunnel in the middle of cemetery.

(8) Burning chest
Firstly you have to put down the fire using rain spell. Then the chest will be escaping from you on the west. Chase it until it stops, and then take items from inside.

Elemental Cave Riddle
(1) Riddle
In this place is located at the entrance to the second tunnel (look at details below).

(2) Riddle
In this place is located the entrance to the first tunnel.

- After finding the entrance to the first cave, guarded by undead, you will see four columns with switches and a board, on which the order of the switches for the second cave is described. Analogically, in the second cave, you will find the order for the first one.
- The order of the switches in the first cave is as follows: earth, water, air, fire.
- The order of the switches in the second cave is as follows: water, earth, air, fire.
- Leave the cave. Enemies will await in both caves now. After defeating them, each one will drop a medallion. Also, a passage to the lower level will open.
- In the lower level, you will see two passages blocked by a blue barrier.
- To deactivate it, you have to place the medallions on the pedestals on both sides.
- Then, you will be able to go inside and collect the treasures that await you there.